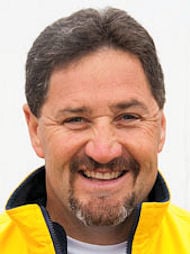 Frank Zucchi was born into a family legacy of hard working, highly talented artisans, from iron working to auto restoration.   With a European heritage, Frank stepped into the automotive restoration trade, where he learned from his Father, who was formally trained in auto restoration in Switzerland. This European craftsmanship was not the easiest of "schools" for Frank, but it gave him a solid foundation and rare talent in the trade.  Fueled by passion for cars, dedication and hard work Frank has maintained the family business and created his own name the high-end auto restoration world.

At the young age of 10 Frank started working at his Father, Arnold Zucchi, shop in Belmont California, which his Father had opened in 1963. While learning the family business, he also started racing Go Karts.  From there his love of racing took him down a long and decorated road, from Midgets to Sprint cars, then SCCA racing both Regionally and Nationally then eventually landing him Indy cars.  Today Frank still races in Vintage and Club car divisions, which includes participating at the prestigious Monterey historic races every year. He shares his vast knowledge and experience of racing with others by being a driving instructor, teaching for various auto clubs and also been on the board for the Racing Drivers Club.

Frank has been a vital part of the Ferrari Club of America, from holding offices for 10 years including President of the Pacific Region in 2016, he also judges for the club. He is the Co-Chair for the Virginia City hill climb an annual event which he has been a participant since 1976.   In 2015 Frank was the Chairman for the coveted International Ferrari Meet, which boosted the largest and most profitable meet in their history.  Alfa Romeo club has had Frank judge for them as well, along with SCCA.